A Brief History of the Church 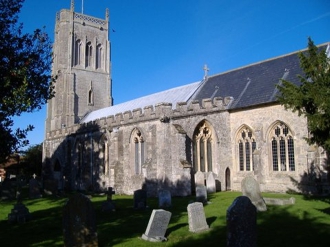 Like many churches in the Cheddar Valley, the Church of the Holy Cross is large and was rebuilt or altered between the late 14th. and early 16th. centuries during a period of great prosperity in the wool trade. It is 150 feet long and can seat a congregation of just under 250.

There does not appear to be any consensus of opinion on the early history of the Church, because there seem to be few records and those that exist are contradictory.

By 1176 Mark was one of four chapels dependent on Wedmore. It eventually achieved full parish status in 1816.

Varying views have been put forward over the years about the development of the Church and many questions remain unanswered. The oldest remaining part of the building, the South Side, or what we now call the Lady Chapel, appears to have replaced a 10th. century or earlier building, and probably dates from 1268 and is therefore almost some 750 years old. However, it may be older.

During the 14th. and 15th. centuries, the Church was enlarged at least twice, if not three times. It was in the late 15th. century that the Chancel was extended, and the Tower and North Porch added. 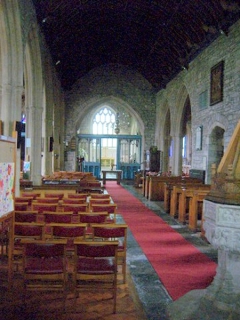 The North Aisle, Porch and Tower all have parapets pierced with quatrefoils (“carved tracery having four foils arranged about a common centre, similar to certain flower leafs, eg. clover”). This is typical of most early Somerset churches.

The TOWER is constructed in three tall stages of two colours of stone. It is the same generation of Tower as Cheddar Church. Fine Towers such as the one at Mark were built for at least a century in Somerset because of money from the wool trade and the period of Tower building is consistent in time with the peak of woollen exports through Bridgwater and Bristol. The Tower has the characteristic three windows abreast with the middle one pierced to form “sound holes” for the Bells and the two lateral ones are “blind”. Rectangular buttresses, changing to diagonal above, extend to the parapet from where they continue as pinnacles. There are some fine niches in the wall of the Tower, but it is not known whether they ever contained figures.

There was a Church Clock by the early 18th. century. A new clock (with two faces) was installed in 1887 to celebrate Queen Victoria`s Jubilee. The clock was wound by hand (once a week and it took half an hour!) until 1972 when it was converted to an electrical winding mechanism. This can be seen in the Bell Ringing Chamber. The timing is controlled electronically. The Tenor Bell strikes the hour and half-hour.

Bells have been rung in Mark Church since the early 1800s.  There is a peal of eight bells.  Two of the bells were placed in memory of men who fell in the Second World War.  The heaviest bell is a tenor and weighs one ton.   The lightest is a treble and weighs four hundredweight.

Although the weather was poor on 17 March 1919, a meeting in the Assembly Rooms discussing placing a war memorial in Mark identified several propositions and then adjourned for a fortnight.  The meeting a fortnight later on 4 April was better attended than the first meeting and, after several proposals, it was decided to erect a memorial at the end of the Causeway on Locksbroad, subject to agreement from Somerset County Council.  A committee, consisting of the Vicar, the Rev’d James Frederic Turner, and Mr. F.J. Court and Mr. F. Cavill, were elected to obtain designs and prices and present to a meeting of the Parish.  A poorly attended meeting at East Mark School held on 28 April agreed to erect a Memorial Cross of Hamhill Stone costing £161 10s 0d.  Since the County Council had not commented on the Locksbroad site, the location remained undecided.  It was hoped to raised £250.  The County Surveyor then raised objections to Locksbroad and at another meeting at East Mark School, agreement was decided to place the Memorial Cross in Mark Churchyard.

The names of the thirteen servicemen who fell in the First World Ware were included.  The four Second World War names were subsequently added.

Part of the annual Remembrance Day Church Service is held at the Memorial, wreaths and poppy crosses being dedicated.

The War Memorial has been professionally cleaned during 2014, in time for Mark to commemorate the centenary of the First World War on 9 November.